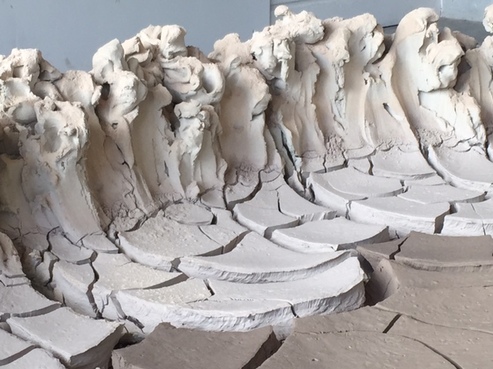 Clay, Water, Gravity…bringing the water cycle to an inside place.

An Evaporation Pool is a process piece that alters for the duration of an exhibition.  The first phase begins as an open basin that becomes a large reflective pool when liquid clay is poured into the form. The basin acquires an exquisite balance of saturation and containment.

The fine particles of clay suspended in water settle to the bottom of the Pool. Sedimentation occurs along with the formation of diluvian channels. The glassy sheet of water above magnifies the subtle activity of the clay settling below, while mirroring light and external images in the surrounding space. The phenomenon of the fractal can be immediately observed.  Geological occurrences and patterns that take place in large scale on the surface of the earth, such as alluvial fans, glaciated canyons, and submerged stream terraces, also form in a smaller scale within the Pool.

Slowly, over the course of an exhibition the water in the Pool is absorbed into the underlying clay basin while at the same time evaporating into the air we breath.  When isolating a small part of a vast water system that has been present throughout the earth’s millennia, I often find myself wondering where this water has transpired before.  How many forms of life were permeated and therefore enabled to live as a result of the passages, upwellings, and permutations of this water over time?  Human beings, while in our nascence, float in the amniotic “fruit water” of the womb.  How many lungs over time have been intimately touched by the very water that lies in a given Pool…. water that seems to lie still but is moving at all times?

Eventually, the water will leave an Evaporation Pool entirely, creating an inner plane of fissures, cracks, and newly formed segments.  The segment patterns are varied in both shape and color, those areas retaining water the longest display a deeper color while the driest sections become lighter.  When fully desiccated, a random orderliness of infinite patterns will have formed.

An Evaporation Pool is a permeable object, a temporary structure existing within the fluidity of change.